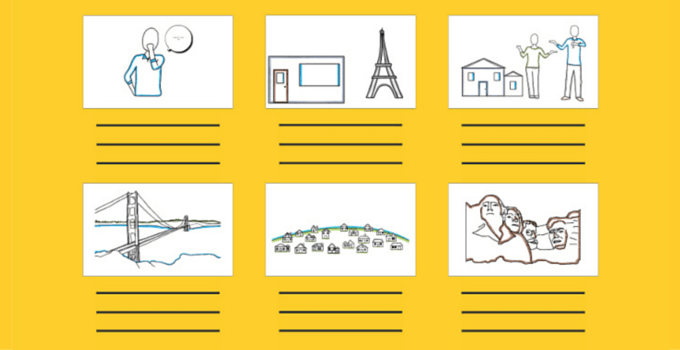 Storyboarding is a technical step that helps you prepare for filming or creating animation. It is a set of pictures for each scene: sometimes detailed, more often simplified and schematic, depending on the project.

In this article, we want to tell you what the value of the storyboard is, and why it speeds up and simplifies filming, rather than slows it down.

Unlike other materials prepared behind the scenes, such as texts for the narrator or the soundtrack, the storyboard itself will not get into the video. Therefore, customers tend to underestimate this stage: since it is not visible in the final result, then it can be neglected to save money.

The storyboard shows the sequence and content of the scenes. By creating it, you prepare visual images, define the dynamics of the scenes, describe the actions of the actors or characters in the frame, the emotions on their faces and their clothes, and create an example for the cameramen, editors, and the rest of the production team.

The illustrations indicate how the camera will move, where the images will zoom in and where they will zoom out. Looking at the storyboard, you can easily imagine what the video will look like.

Here is a fragment of a fairly detailed storyboard of the commercial, in it under each illustration put a frame from the finished animation video, to be more clearly: 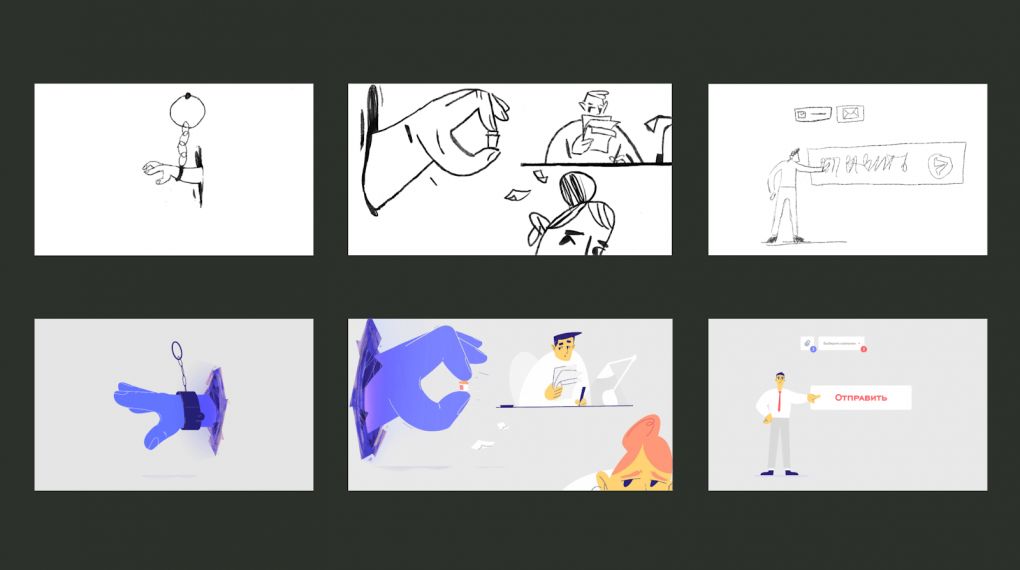 How to create a storyboard

To create a storyboard, you need to prepare a script and determine the style of the video. That is, before you draw, you need to:

1. Approve the text: understand exactly what the narrator reads behind the scenes, what lines the actors or characters say

2. Understand what style you need: often this agrees on the appearance of a single keyframe.

The storyboard is drawn by the illustrator, who understands the filming process: knows how the cameras move, how the characters stand during the dialogue, how editing is done.
The illustrator is assisted by a screenwriter or copywriter, who finishes the text at this time and can explain the essence of each scene. The manager supervises the work to make sure that the clip solves the client's creative problem.

The storyboard is drawn by hand on paper, Photoshop or other graphic editors are used; sometimes illustrations are combined with photographs. It all depends on the project: the more complex the shoot, the more thoroughly you need to prepare. If the project is simple, the storyboard can be drawn schematically.

We often prepare storyboards in Boords, where you can upload illustrations and sign text under each one. The work in Boords is easy to share: you can send the client a link and he can open the storyboard in his browser. 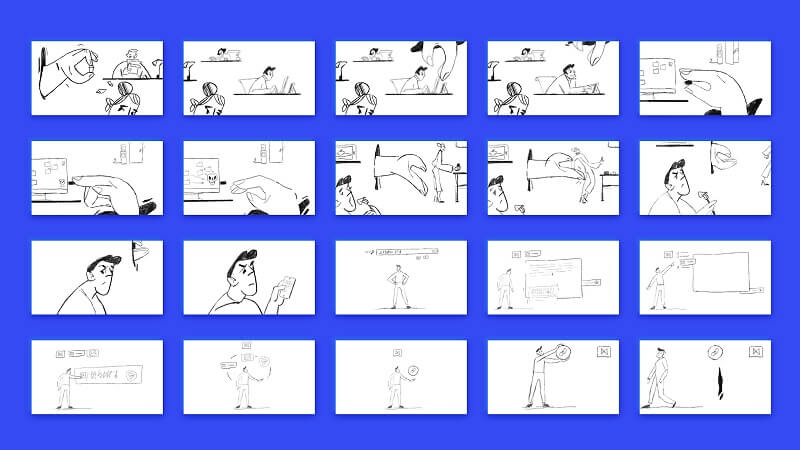 A storyboard doesn't take long. It takes one day to prepare it for a short commercial. A storyboard can potentially save a lot more time and money on a project.

1. A storyboard helps you adjust your client's expectations

The storyboard reduces the likelihood of rework and additional filming, because it allows you to adjust the client's expectations at the preparation stage.

The client gets an outline of the result, can give feedback, and has a rough idea of what the video will look like. And the production team gets confirmation that the client agrees with their creative concept.

2. In the storyboard it will be noticeable if the video lacks dynamics

Every video has dynamics. This characteristic describes how fast things happen in the frame, how fast scenes change. If a video lacks dynamics, it means it's boring to watch, because nothing is happening in the frame.

Often clients want to add a lot of content to a short commercial: list all the benefits of the company, tell a nice story, add humor. If all this content is voiced by an announcer, but nothing happens in the frame, the commercial will be boring.

When the illustrator draws a storyboard to the text, all the lingering moments will be immediately visible. For example, if the video will have a scene where the narrator reads the text for eight seconds, and the characters just stand there and wave, you will notice that the dynamics sags.

To correct the situation, you can think about what else the characters can do. Without a storyboard, it is difficult to understand the density of scenes and assess the dynamics.

For animation clips, we sometimes do animatik - that is, a storyboard that comes to life and changes slide by slide. Not all projects require animation, often the dynamics can be tracked by static illustrations.

But in long commercials with lots of characters or, for example, in an explorer for an IT product, it is useful to make an animatic to make sure there are no drawn-out scenes.

A storyboard will save time on a project because the creative team comes to a consensus faster. To create a storyboard, you have to decide on the main visuals, style, scene order, and actor types.

The team will also have to think about how to structure the composition of the frame, what angles to take. Because these decisions are discussed and approved before filming begins, to let the process go faster.

4. Storyboarding will speed up animation production

An animation clip is created like this: an artist prepares illustrations, then a motion designer animates them. That is, to create animation, you first have to draw a lot of pictures: characters, background, objects.

It's much easier to draw from a ready-made storyboard. All the fundamental solutions are already found, it only remains to supplement and detail sketches.

Besides, it's much quicker to make changes at the stage of storyboard drawing than in ready-made illustrations. As a result, he will finish his part of the work much faster.

When not to make a storyboard

If you are sure that you and your client understand each other, you can drop this step. For example, if this is the fifth similar video in a row that you've done together, the four previous ones were storyboards and there weren't many edits. That is, you know that the crew understands your tasks well and found a style that you like.

In all other cases, it's better to spend time on the storyboard. It will pay off.

A storyboard is a set of illustrations that show the sequence and content of scenes. You can make them very detailed, which is useful in complex projects. Looking at the storyboard, you can easily visualize the entire clip.

Illustrations serve as an example for cameramen, editors and the rest of the crew, because they show how the camera moves, what angles to take, what editing will be.

The storyboard is prepared by the illustrator, the screenwriter helps him, the manager oversees the process. This is a technical step, but it should not be omitted, because the storyboard will save you money and time:

- You'll have a better understanding of what to expect, the risk of rework will be reduced;
- you will notice before filming if the video has drawn-out and boring scenes where nothing happens;

the team will discuss and make all important creative and technical decisions in advance, so the shooting will go faster;
the artist will draw illustrations for the animation clip faster, because it is easier to draw from the storyboard. How to Write a Tagline that Truly Works